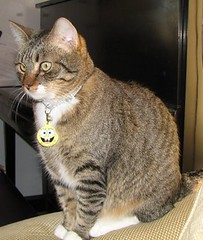 My one resolution this year is the same as my daughter Elaine's: to be "vegan at home". Meaning I will buy and eat only vegan foods at home but at restaurants (and takeout, too, really) I will stretch it to vegetarian, lacto-ovo. Mainly a matter of convenience, I admit.

Today, though, I broke the rule. I bought Ben & Jerry's Americone Dream ice cream.  It's named for Stephen Colbert, as anyone who watches the show will know. When I brought the ice cream to the checkout counter, the checker asked if I had seen it on the Colbert Report. I said yes. He said he had gotten some too, and he also got some of the Willy Nelson ice cream "...but I felt like a traitor".

I told him I had taken the last two in the row. He said it was selling well.

It warms my heart to know that I live in a little Colbert Nation here.
Collapse