Saturday morning. I do not know when I will return home. Maybe Monday, maybe Tuesday, maybe even tomorrow. I can't make up my mind.

Last Wednesday was my day alone in Mary's house. I clanked around there, read books, fixed her roomba (Sammy) - it was badly clogged - then had lunch with Elaine, Ed, and Mimi at Ghandi, and  got waxed and manicured with Elaine and Mimi while Ed wandered around. It was good getting those hairs pulled from my face, been too long. I was developing an abominable snowman look, which isn't good on me.

It was wedding prep day. That evening Mary and I went to a salon called Diva, not far from her new temporary house, and had our hair done. Lowlighting and a lot of cutting on my end, stripey highlighting and a cool cut on Mary's. We dumped mucho dollaros there. But we were in one of the "top 20 salons in the US", according to an article in Modern Salon. Which Mary had picked from a phone book. Thought it sounded like a good name.

That left the makeup. Elaine had an appointment for makeup and an updo Thursday morning. Mary and I planned to hit a local department store's makeup counters as soon as they opened. The wedding people were to arrive at 12:30 to drive us to Valley of Fire for the wedding, so we had some running to do. Only because everything is so far from everything else and the traffic doesn't let up.

So even a simple wedding can involve a lot of time. I cannot imagine being involved in a big wedding. I think I'd have a heart attack.

The wedding party, as they call it, consisted of only Elaine, Ed, Mimi, Mary, Joey, and me. A nice small number. Added to that were two photographers and the person doing the service, who also drove the SUV.

Oh, I learned on this trip that sometimes having one of these SUVs in a city can actually be a good thing... 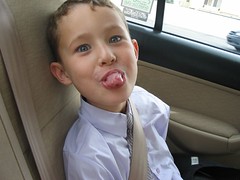 In the car
Originally uploaded by judyjudyjudy.
a quick upload of photos from the wedding day
Collapse